Chee Soo being interviewed on Nationwide TV in 1973

The small guy is John ( joey ) Chamberlain and the one trying to lift Chee Soo is Doug Salmon. In the background is Lavinia Chee Soo’s daughter beating up her training partner with her umbrella. Alan Smith kindly provided me with this information he trained with them all at Chee soo’s St Neots club in London. 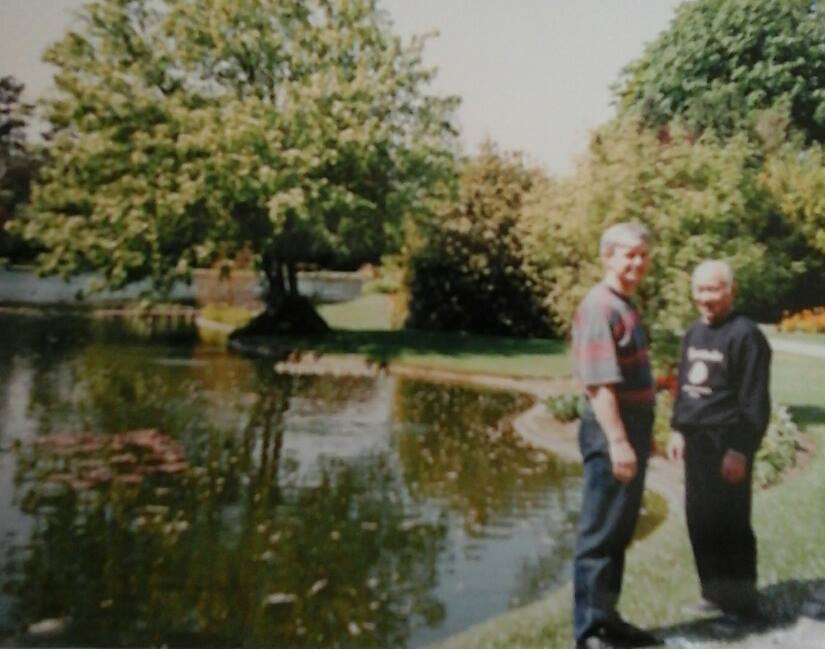 It was an honour to train with this amazing man for 21 fascinating years.

The only fitting tribute is thanks for the training Master!

These were based on foundations laid down by Chan Kam Lee. Chan Lee died in a severe storm off the coast of China near Canton in the winter of 1953/54. Chee Soo, Chan Lee’s student since 1934 was asked to take over the leadership of the Association. In memory of Chan Lee, Chee Soo turned down any title within the Associations at time.

In 1958, with so many Lee Style Tai Chi and Feng Shou (Kung Fu) groups and clubs being formed, Chee Soo decided to accept the post of President of the Association. Since then the Association has grown from strength to strength in the British Isles and abroad. Chee Soo devoted his life to the practice and teaching of Tai Chi and the other Lee Family Arts, and anyone who has ever been to one of his classes will have seen for themselves the enthusiasm and love he had for these Chinese arts. Master Chee Soo passed away in 1994.

Where does the Lee Family Style of Tai Chi originate from?

Up until 1934 Lee Style Tai Chi had remained a family style, originally created by Ho-Hsieh Lee around 1000BC. Lee Style Tai Chi form began with only eight moves and over the centuries developed to the present style, consisting of 140 single movements, in the form of forty-two sets.

The Lee Style Tai Chi is commonly known as the Yin and Yang Style, as everything within it is in complete harmony and in perfect balance.

Physically Lee style Tai Chi form tones and conditions the muscles. A training session should have a calming and revitalizing effect on the whole body. For those who are interested, the Taoist diet ‘Ch’ang Ming’ meaning ‘long life’ is also available to everyone.

Mentally by gaining physical control and stability over the body the Lee style Tai Chi practitioner’s mental capabilities are increased and self-discipline is strengthened. Students of the Lee style learn to take responsibility for their actions, strengthening their ability to make rational decisions in the process. This allows the mind to becomes more responsive to prevailing conditions.

Emotionally the concentration required from the practise of Lee style Tai Chi, along with the beneficial effect of both Chinese Yoga and the breathing exercises of Dao Yin, calms and clears the mind of everyday worries. That is why Lee style Tai Chi is often described as a moving form of meditation. The Lee Family Tai Chi Art also promotes correct deep breathing which calms and soothes the nerves nourishing the body with oxygen.

Spiritually this fourth section does not refer to the religious side of our lives, rather it is the spiritual growth within ourselves. Continuous practise of Lee style Tai Chi, Kai Men (Chinese Yoga) and the breathing techniques of Dao Yin will make it easier for you to follow these golden rules:-

Do good – do nothing wrong.

The common sense of these Lee Style Tai Chi rules is easy to understand, however, putting them into practise in our daily life is somewhat harder.

Try to move with the flow of life and not fight it. By learning to go with the flow, we can make our existence here on earth smoother, more tranquil. We can enjoy such happiness, seeing for ourselves that miracles do not happen only in the bible, but prevail everywhere, everyday of our lives.

A short clip showing the Feng Shou weapons training day Chee Soo held at: Alderman Callow School, Mitchell Avenue, Coventry in June 1989 where as well as training, we all celebrated Chee Soo’s 70 birthday. The quality is poor as it was taken from a video given to me in 1989 by Marilyn Chee Soo’s wife, so the video tape is over 20 years old.